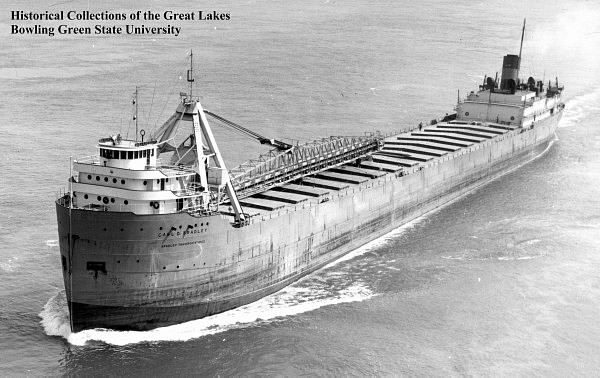 Sinking Detail
Battling 30-foot waves and 65 mph winds , she rode up on a huge wave and broke in two, sinking quickly. The German motor vessel Christian Sartori was first on the scene, but was unable to find any of her crew. Extensive air-sea rescue operation by the Coast Guard yielded just two freezing survivors on a raft 14 hours later. She was bound Buffington Harbor, IL, for Calcite, MI, and was the 2nd largest vessel ever lost on the Lakes. Vessel owners and insurance companies claimed for years that she was simply overwhelmed by the storm, and didn’t break in two, but dives in the spring of 1997 confirmed that she had, thereby proving that it was hull failure rather than an act of God which killed her.
Owned by the Bradley Fleet. Her homeport of Rogers City, MI was also the home of 33 of her crew.”
Loss Date: 11/18/1958
Loss Place: By Beaver Island in north part of Lake Michigan
Loss Life: 33 of 35
Loss Reason: Storm
Vessel Cargo: In ballast (empty at the time it went down carrying only water for ballast)

Shipwreck Description
This is the second-largest shipwreck in the lakes. The Edmund Fitzgerald was 729′ in length. The wreck is intact and sits deep with the pilot house being the shallowest point at 300ft. It broke in two parts in a violent storm on November 18, 1958. This is an advanced technical dive.
Dive Type: Expedition
Depth Deck(ft): 324 ft
Depth Bottom(ft): 370 ft
Depth Deck(m): 99 m
Depth Bottom(m): 113 m