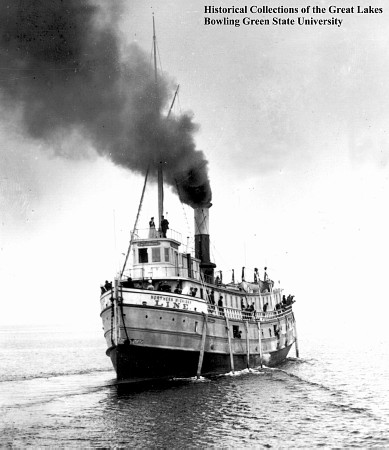 Sinking Detail
She foundered in a gale. The sole survivor was picked up on a small raft 2 days later. Most casualties died of exposure. Bound Mackinac Isl. & upper L. Mich ports for Chicago. Most contemporary reports of the number of casualties say about 50 were lost, but later reports revised the number downward. She had stopped at many small ports in Michigan on her way to Chicago from Cheboygan, Mich., so many of those who had embarked at those points were unknown.
There were accusations at the time that she was overloaded, causing her cargo doors to be left open. These were confirmed in 1969 when the vessel was found.
When she came out, marine men said she was unstable, because of her narrow beam and high upperworks.
Loss Date: 10/25/1887
Loss Place: 6 mi NE of Two Rivers Point
Loss Life: 36-41 with only one survivor
Loss Reason: Storm
Vessel Cargo: General freight

Shipwreck Description
She lies upright and very intact in 205 feet of water. The Vernon was one of the few package vessels on Lake Michigan that sank with her cargo intact. Her deck can be reached at 175 feet and the name Vernon – Chicago is still on her stern though obstructed by mussels now.