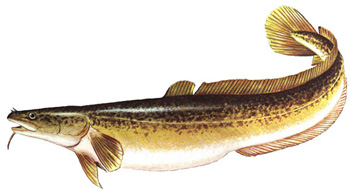 Burbots are slow moving and like to hide in dark places around shipwrecks even deeper ones. Divers can literally “run” into them if not paying attention while shipwreck diving.  This is a freshwater fish related to the cods. It is also known as the lawyer, and eelpout, and closely related to the ling and the cusk. Burbot are the only freshwater fish that spawn in the winter, usually in late January.  Burbots are fair to good eating (recommended use is boiling), but rarely used as food, as most fishermen are put off by their “eely” appearance.

Bass is a name shared by many different species of popular game fish. The average largemouth bass weighs 1 to 2 pounds and between 8 and 18 inches long. It can live as long as 23 years, and, along with the black crappie, is also known as the Oswego bass. 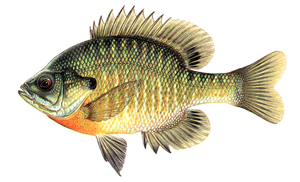 Divers can see these fish on shallow shipwrecks and more often in quarries. They are usually small in size.

Bluegills are popular game fish, caught with live bait, flies or other lures, chiefly at dawn and dusk. They are noted for seeking out underwater vegetation for cover; their natural diet consists largely of small invertebrates and very small fish. The bluegill is a schooling fish with schools of 20–30 individuals.

Divers can see the carp in inland lakes and shallow shipwrecks.

This fish was brought to U.S. from Europe in 1800s as high quality food fish. While tasty when grown in good water, carp can be riddled with small bones in unpredictable locations. Most carp have a fishy taste and are not considered to be good for eating in North America, although they are popular in restaurants in Japan and Taiwan where the fish are also considered to be signs of good fortune. The common carp is one of the most aqua-cultured consumption fish in the world, produced in the hundreds of thousands of tons annually. Carp is a traditional Christmas Eve dish in the Czech Republic, Slovakia, Germany and Poland.

Active game fish that is suitable for eating despite the fact that it is a bottom feeder. One of the most fascinating Great Lakes inhabitants is the channel catfish. This species of fish appears to have lived in North America for at least 3000 years. They are presently found in all the Great Lakes except Lake Superior.

This fish is a fierce game fish with teeth like a small barracuda. The muskellunge, or muskie, as it is often called, is an extremely efficient “predator machine.” It lurks near shore in the shadows of plants or submerged logs, and ventures forth only to strike swiftly at a prey fish (which it often takes back to a concealed area before eating). During summer’s peak heat a muskie may move into slightly deeper, cooler waters but will still choose the protection of a drop-off or some underwater obstruction.

Indeed, muskies are second only to sturgeons as the Great Lakes’ largest fish. Individuals have weighed in at more than 100 pounds and exceeded six feet in length! The average adult size is an impressive 28-48 inches (0.7-1.2 m) long with a weight of 5-36 pounds (2 to 16kg).

Yellow perch are primarily bottom feeders with a slow deliberate bite. They eat almost anything, but prefer minnows, insect larvae, plankton, and worms. Tackle may range from a simple handline or a fly rod in summer to a short, whippy, jigging rod in winter. Because perch prefer cooler water, the best fishing is usually in deep water. Perch move about in schools, often numbering in the hundreds. If one spot is unproductive after a few tries, it is best to move to other spots until a school is located.
Northern Pike (Esox lucius)Pike

This fish is usually found in the northern Great Lakes regions. Northern pike flesh excels in flavor, thus making them a doubly rewarding game fish. Pikes can grow to a maximum recorded length of 6ft (1.83 m), reaching a maximum recorded weight of 77lb (35 kg). Individuals have been reported to reach 30 years in age. They have the elongated, torpedo-like form of predatory fishes, with sharply-pointed heads and sharp teeth. Their coloration is typically grey-green with a mottled or spotted appearance. The pike’s marking is like a finger print, each with different patterns.

Smelts are small usually 7 to 9 inches (18 to 23cm) and on average 3 ounces (8.5 dkg). Divers can see them early in the season in large school around shipwrecks. The rest of the year, smelt school in the lakes cool, dark waters. Since they are sensitive to temperature and especially to light, they keep to the mid-waters of the lake, and may descend to near bottom during bright daylight. A cool 45 degree F (7 degree C) is their optimum water temperature.

The smelt is native to North America’s Atlantic coast from New Jersey to Labrador, and also occur naturally as landlocked populations in some lakes of New England and eastern Canada. In 1912, smelt were planted in Crystal Lake, Michigan, and from there they made their way to Lake Michigan.

Fish that prey on smelt are coho salmon, burbot, trout, walleye, yellow perch and other smelt!

Sturgeon is a term for a genus of fish (Acipenser) of which twenty-one species are known. One of the oldest genera of fish in existence, they are native to European, Asian, and North American waters. Lake sturgeons are the only sturgeon species endemic to the Great Lakes basin and are the largest freshwater fish indigenous (native) to that system. Lake sturgeon can be considered a nearshore, warmwater species with water temperature and depth preferences of low 50s to mid-60oF (10 to 16 C) and 15-30 feet (3 to 4.5 m), respectively.

It is an important game and food fish in the Great Lakes. Walleye are the largest member of the perch family. These battling fish are exciting to catch, delicious to eat and because they feed actively all winter, they provide a fine year-round sport fishery. Divers can see walleyes in the spring as the fish congregate in shallow bay waters seeking out rocky areas and submerged bars.

The common name, “walleye”, comes from the fact that their eyes, not unlike those of cats, reflect light. This is the result of a light-gathering layer in the eyes called the tapetum lucidum which allows the fish to see well in low-light conditions. Walleyes are greedy predators. They eat small bass, trout, pike, perch and sunfishes. Prime feeding times are early morning and evening. Although in turbid waters walleyes are active throughout the day. Walleyes often associate with yellow perch, smallmouth bass, northern pike and muskellunge.