Tap To Call
Home » Shipwreck Explorers » On this day (5/23) in 1956, DREDGE NO. 6 capsized and sank in Lake Michigan (Wisconsin Marine Historical Society)

On this day (5/23) in 1956, DREDGE NO. 6 capsized and sank in Lake Michigan (Wisconsin Marine Historical Society)

On this day (5/23) in 1956, DREDGE NO. 6 capsized and sank in Lake Michigan about six and one-half miles southeast of Milwaukee, Wisconsin. Because of weather conditions, it was being towed from an unprotected work site at the Oak Creek power plant to Milwaukee’s harbor. Nine of the 19 men on board died.
Manitowoc Ship Building & Dry Dock Company, Manitowoc, Wisconsin, designed and built DREDGE NO. 6 for the Fitz Simons & Connell Dredge & Dock Company of Chicago. Delivered in 1913, it was “one of the most modern and best-equipped dipper dredges on the Great Lakes.” DREDGE NO. 6 was a steel hulled, box type, unpowered barge 110 feet long and 40 feet wide. Installed on this platform was a steam-powered shovel with a 40-foot boom and an eight cubic yard bucket built by the Bucyrus Company of South Milwaukee. Also packed into this space were a boiler, assorted machinery, and living accommodations for about 20 men. 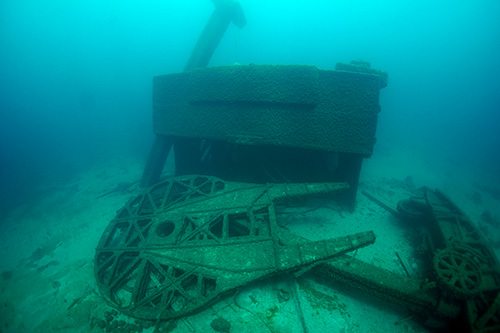 Since May 8, the dredge and its crew had been working round the clock to clear a channel and turning basin at Wisconsin Electric’s new coal-fired power plant at Oak Creek. The first unit had gone online in 1953. However, because the ship channel and turning basin were not deep enough, lake boats supplying the facility could not be fully loaded. This was becoming an issue now that the fourth unit was almost complete.
Selected to do the work was Fitz Simons & Connell Dredge & Dock Company, a well-respected Chicago marine contractor organized shortly after the Civil War. Fitz Simons & Connell was now a division of Merritt-Chapman & Scott Corporation of New York, having been taken over in 1953. Responsible officials included: Richard Fox, general foreman; Martin Walsh, dredge master; and Robert Affleck, captain of the tug E JAMES FUCIK.
On the evening of May 22, Fox, Walsh and Affleck discussed the weather forecast. A strong northeasterly wind was expected the following day so it was decided to move the dredge to a protected area. Because the power plant dock was occupied, Captain Walsh decided to head for Milwaukee, about 15 miles distant. At 10:50 that night, the dredge departed Oak Creek with a full crew on board. Winds were from the northeast at about 15 miles per hour with waves of three to four feet.
As the FUCIK, with DREDGE NO. 6 in tow, worked its way north, conditions deteriorated. Winds increased to 29 miles per hour with gusts to 38, and waves reached ten feet. The dredge was not designed for these conditions and began taking water through openings in the deck. The crew attempted to plug these gaps but was not successful. With water rising, Captain Walsh tried to alert the tug by blowing a danger signal on the dredge’s whistle – there was no direct communication between the dredge and tug. Unfortunately, men on the FUCIK could not hear the whistle.
By now, the dredge had developed a starboard list. The men were all on deck and wearing life jackets. About 2:00 in the morning, a cable securing the boom let go and it swung into the list. Less than a minute later, the dredge capsized. It was about two and one-half miles from shore, still six and one-half miles from Milwaukee’s harbor.
Almost immediately, the FUCIK dropped the towline and turned around. Captain Affleck tried calling for help but his radio malfunctioned. A distress call would not be sent for another 30 minutes. In the meantime, the FUCIK searched for survivors. With the lake temperature between 45 and 50 degrees, the tug had to work quickly. The FUCIK rescued 10 men and recovered 3 bodies. The Coast Guard recovered four more bodies later that day. Two were never found.
In its report, the Coast Guard noted that “weather conditions encountered were more severe than forecast.” Nevertheless, the report criticized Captain Walsh for not transferring the men to shore at Oak Creek before moving the dredge. It also found fault with Mr. Fox, an executive officer of the corporation. He allowed the dredge to navigate the open waters of Lake Michigan during rough weather with 19 persons on board knowing the vessel was not suitable for such operation. Finally, the board suggested extending existing inspection requirements to dredges.
Today, four units at the Oak Creek generating station use approximately 6,000 tons of coal daily to produce 1,135 megawatts of electricity. That coal no longer comes by lake boat. In 1968, the utility completed a rail unloading facility. And since 1992, the plant has used low sulfur western coal, which now all comes by unit train.
DREDGE NO. 6 rests inverted in roughly 75 feet of water. It is a popular dive site. The bucket and boom are clearly visible on the lake floor. Divers can also explore the crew quarters and coal bunkers. However, “divers are cautioned to penetrate the wreck only if qualified.” 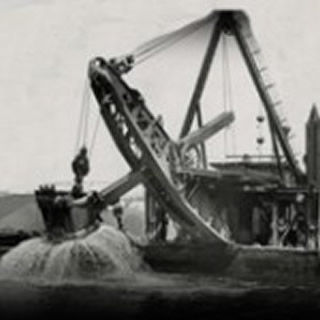 The Rest of the Story:
35 years before the fictional character Gordon Gekko (greed is good) made his debut, Americans were introduced to Louis Wolfson, a junk dealer’s son turned corporate raider. In 1951, Wolfson engineered a hostile takeover of Merritt-Chapman & Scott, a well-respected New York marine salvage and construction firm with roots dating back to the Civil War. In 1953, Merritt-Chapman acquired Fitz Simon & Connell Dredge and Dock, another notable marine contractor.
By the early 1960s, Wolfson’s empire was collapsing. Both Merritt-Chapman & Scott and Fitz Simon & Connell disappeared. Through it all, Wolfson remained fabulously wealthy. Some, including the government, questioned his methods and motives. After years of litigation, Wolfson spent ten months in prison and paid a substantial fine for selling unregistered securities and perjury.
As his legal woes mounted, Wolfson turned to his friend and lawyer, Abe Fortas. A former advisor to the Securities and Exchange Commission, Fortas was now a Supreme Court justice and confidant of President Johnson. Wolfson set up a family foundation that, for unspecified advice, would pay Fortas $20,000 per year for the rest of his life. This highly unusual agreement, although not illegal, was kept secret.
In 1968, Chief Justice Earl Warren wanted to retire and Johnson nominated Fortas to succeed him. Being an election year, a group of conservative southern Republicans blocked the nomination. Warren did not retire and Fortas remained an associate justice, but not for long.
The Wolfson foundation made one $20,000 payment to Fortas, which he returned. It didn’t matter. After details of the arrangement were made public, Fortas resigned from the court in 1969 and returned to private practice. Louis Wolfson, the man who in 1954 claimed it was easier to make a million than $100,000, retired from the world of high finance to raise horses. One of his thoroughbreds, Affirmed, won the Triple Crown in 1978.

Note: Merritt-Chapman & Scott built the foundations for the Mackinac Bridge. 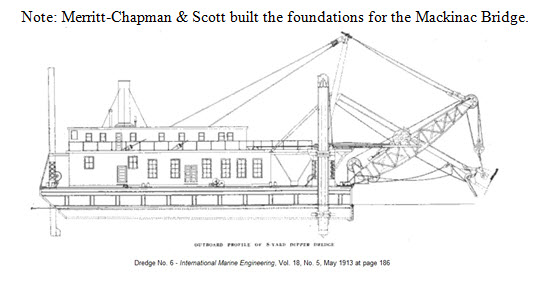