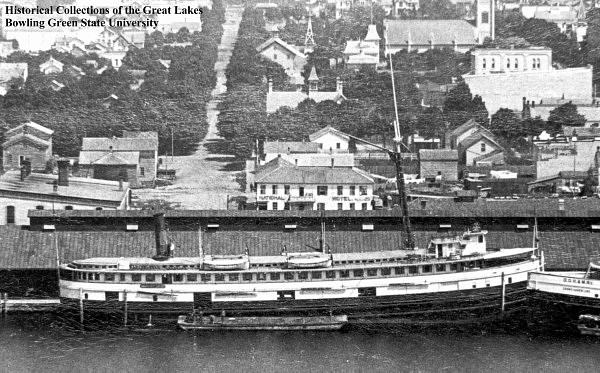 Sinking Detail
The ship became entrapped in ice off Holland, MI, Lake Michigan, on February 9, 1885; squeezed and sunk on March 19, 1885. Crew taken off by tug Arctic; no lives lost. Final location discovered in summer 2005. The vessel was found upright in over 270 feet of water off Holland.
Loss Date: 3/19/1885
Loss Place: Off of Holland, MI
Loss Life: None
Loss Reason: Crushed by ice
Vessel Cargo:

Shipwreck Description
She sits upright and intact. Divers with proper training can swim inside and see old navigation lights. Built as a sister ship to the S. S Wisconsin by the Detroit Dry Dock Company at Wyandotte, Michigan for the Goodrich Transportation Company, the S. S. Michigan was a sturdy iron-hulled passenger steamer. Goodrich had ordered three ships built in 1881 — the two propellers and a side-wheeler named the S. S. City of Milwaukee. She was powered by an F & AC compound engine with 27″ and 44″ cylinders and a 40 inch stroke. She had a 10 foot diameter, 18 foot long boiler built by De Soto & Hutton of Detroit. She was 203.9 feet long, 35.1 feet wide and had a draft of 11.7 feet. She was rated at 1,183 tons gross and 1,024 tons net.